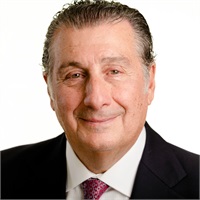 Nathan M. Perlmutter, CLU®, ChFC®, the President and Chief Executive Officer of Forest Hills Financial Group, Inc., founded the agency in 1980 as a General Agent of The Guardian Life Insurance Company of America, New York City, NY. The Agency is one of the leading agencies representing Guardian. Forest Hills Financial Group, Inc. is presently a charter member of Guardian’s Presidents Forum. Nat has served three terms as Chairman of Guardian’s prestigious Field Advisory Board. His agency was built from scratch with two associates and 400 square feet, and Nat was one of the two associates and has become a Master Agency award winner.

Nat is a Past President of AALU, (Association for Advanced Life Underwriting) and a Platinum contributor to its Legislative Circle. Nat is also a past member of the Board of Directors of the Life and Health Foundation for Education, as well as being an Emissary IFAPAC contributor and an associate member of the American Society of Pension Actuaries.

In 1994 Nat received the Torch of Liberty Award from the Life Insurance Division of the AntiDefamation League. The President of the Borough of Queens has awarded him the “Citation of Honor” for his work, dedication and service to the needs of children and families at the Queens Guidance Center.